Micah Thomas, a three-star small forward from Huntington Prep in West Virginia and a Memphis native, has committed to play his college basketball at Maryland. 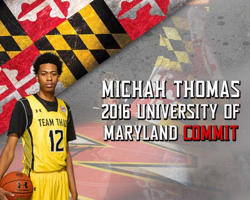 Thomas becomes the third member of Maryland's 2016 class and the first forward in the group. He's an important get, because Maryland could lose all three starting members of its frontcourt – Jake Layman, Robert Carter Jr. and Diamond Stone – before next season begins. The Terps had to have a forward, and now they have one.

Thomas is rated as a high three-star recruit on the 247Sports Composite, and he had offers from Louisville, Baylor, Iowa State and LSU, among other programs. He is listed at a lanky 6'7 and 185 pounds, and he'll surely be a physical developmental project for Maryland basketball performance director Kyle Tarp.

Maryland had ranked 33rd nationally in next season's recruiting class before Thomas' commitment. With him, according to 247, the Terps jump to No. 17, one spot ahead of Penn State, which has probably its best class ever lined up.

"Thomas, ranked as the No. 2 senior from Tennessee and the fifth-best uncommitted small forward in the country, could vie for immediate minutes next year following the departure of starting small forward Layman. He was scouted and recruited by assistant coach Dustin Clark and head coach Turgeon, committing to Maryland sight unseen; he's scheduled to officially visit College Park on April 8 and will sign with the Terps the following week, when the NCAA's spring signing period begins.

"Playing time. That's the only thing he's really looking at. Mama bear's looking at other things, but he's looking at if he can get in and get some quality playing time," Thomas' mother, Pam Lee told InsideMDSports.com earlier this season. "They said that they can see him coming in and playing the No. 2, the three and the four, and if he's able to play any of them, he would have the opportunity for playing time."